Drugs to treat various diseases and cardiovascular risk factors such as obesity, hypertension, diabetes and high cholesterol, which together are known as the Metabolic Syndrome.

Currently, there is no drug to treat metabolic syndrome as a whole, but only specific treatments for its components in isolation. Thus, an inhibitor of the 11β-HSD1 enzyme could provide simultaneous treatment for these diseases, improving adherence and specificity of the therapy.

¿HOW TO SOLVE IT?

By using structural bioinformatics tools and biological evaluation techniques in metabolically relevant cell lines to identify and optimize new drugs aimed at selectively inhibiting the activity of the 11β-HSD1 enzyme.

Physician-Surgeon at the University of Chile, specializing in Internal Medicine and Endocrinology at the Pontifical Catholic University of Chile, Post Doctorate in Molecular Biology from the University of California San Francisco (UCSF). World expert on the subject of Mineralocorticoid Hypertension for the Endocrine Society.
In the 1990s, he began as a researcher with the Fellowship of the National Institute of Health (NIH) and then obtained the scholarship from the Honorary President of the Republic of the Ministry of Development and Planning (MIDEPLAN).

Returned to Chile in 1994 and developed the line of research on endocrine hypertension and metabolic syndromeby being awarded seven consecutive FONDECYT projects, two FONDEF projects, one CORFO project and one member of the Millennium Scientific Initiative (ICM).

In these two decades, his line has focused on the mechanisms and genes potentially involved in the emergence of hypertension and metabolic syndrome that has given rise to 130 ISI articles and more than 50 awards, both at national or international congresses.

On three occasions, he won the prize for best work published in Chile (awarded by the Medical Society 1994, 2001, 2014), twice the Excellence in Research award (awarded by the Universidad Católica in 1997 and 2012), the Academy Award for Medicine for the trajectory in research (2002) and recently the Prize for University Scientific Research granted by the El Mercurio newspaper and the Santander Bank.

In 2008 he was nominated a world expert in the topic of Hypertension Mineralocorticoidea, where he elaborated the guidelines for diagnosis and treatment of primary hyperaldosteronism together with a group of 8 experts appointed by the Endocrine Society.

DEVELOPMENT OF NEW DRUGS FOR THE TREATMENT OF HYPERTENSION AND METABOLIC SYNDROME.

*Approved by the National or International regulatory body

INNOVATION WITH A POSITIVE IMPACT ON SOCIETY

This would reduce combination therapy, side effects and associated costs. At a national level we have calculated the recovery of years of healthy life (AVISA) lost by the population, due to disability and premature death due to metabolic syndrome. Conceptually the benefit comes from the recovery of AVISA by having a drug that allows the simultaneous treatment of hypertension and diabetes. 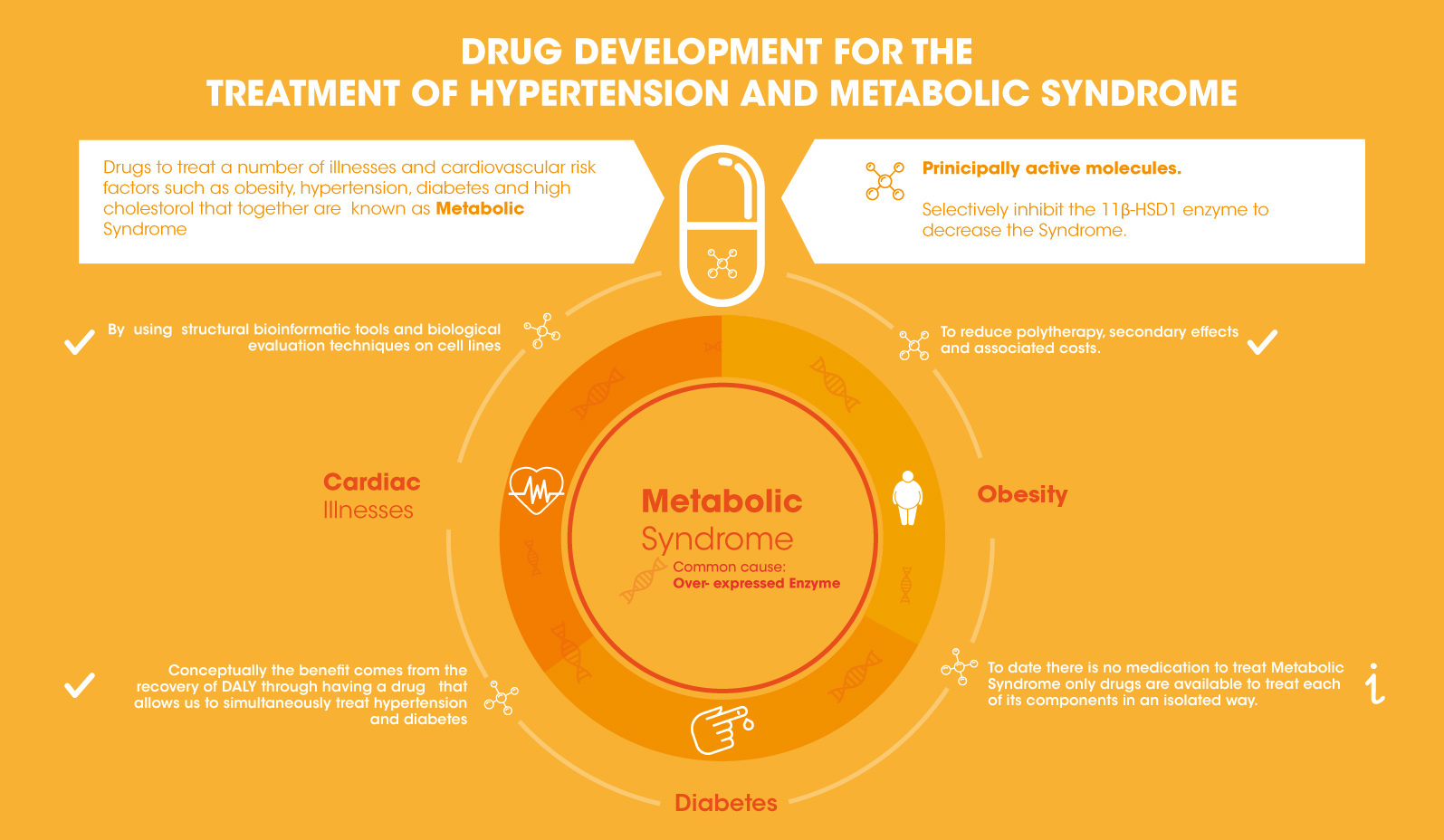